Difference between revisions of "Performance Reports"

Allinea Performance Reports is a performance characterization tool for HPC applications. It supports single node as well as multi node MPI programs and gives a way to identify performance bottlenecks. For example Performance Reports can tell you if your program could benefit from a faster I/O device such as a SSD or rather needs a better Infiniband network. Especially useful can be the information about peak memory usage per process as this gives a hint what to specify as pmem when submitting a job.

For developers it gives hints on which part of the program time should be spent on optimization. But the result of Performance Reports is rather coarse and for more detailed analysis a profiling program like MAP should be used.

Allinea Performance Reports is easy to use as you don't need to recompile or relink your application. All you need to do is prefix you execution command with "perf-report" like in the following examples.

When the program finishes two output files are written to the working directory. One txt file which can be easily viewed with less on the cluster and one single-page html file with better looking graphs. The following image shows the result of a compute bound 2 node job (FFT calculation) which uses 2.65 GB memory per process. Performance Reports points out that there could be vectorization problems. 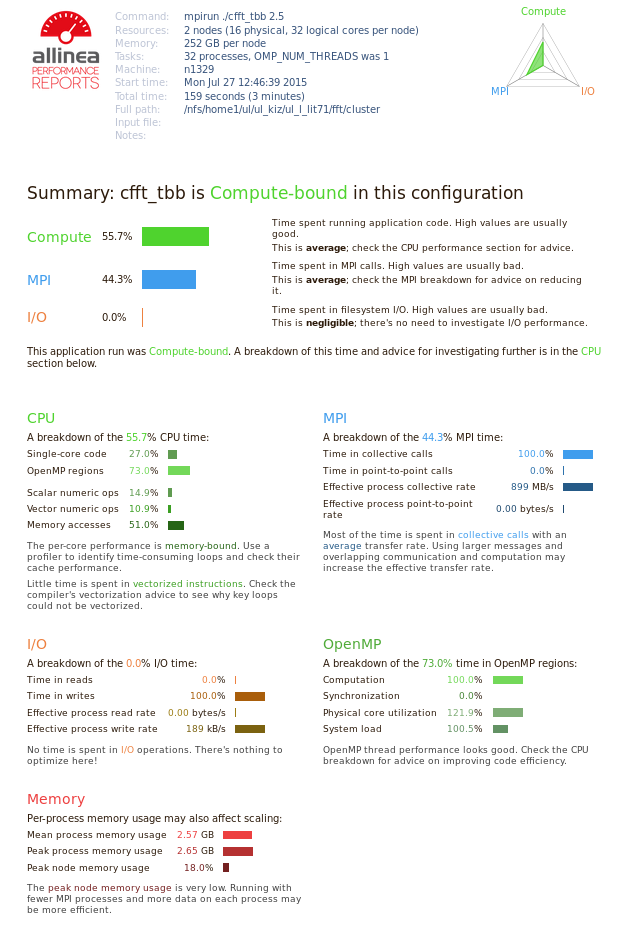