Basically, compilers translate human-readable source code (e.g. C++ interpreted as adhering to ISO/IEC 14882:2014, encoded in UTF-8 text) into binary byte code (e.g. x86-64 with Linux ABI in ELF-format). Compilers are complex software and have become very powerful in the last decades, to guide you as a programmer writing better, more portable, more performant programs. Use the compiler as a tool -- and best use multiple compilers on the same source code for best results. The basic operations and hints can be performed with the same or similar commands on all available compilers. For advanced usage such as optimization and profiling you should consult the best practice guide of the compiler you intend to use (GCC, Intel Suite).

More information about the MPI versions of the GNU and Intel Compilers is available here:

Modules and loading of modules is described here for Lmod and here for traditional Environment Modules.

However, modules need to be mentioned, since on any system there's a pre-installed set of compilers (for C, C++ and usually Fortran), which are provided by the Linux distribution -- the so-called system compilers. Which however may lack certain options for optimization, for warnings or other features. On RedHat Enterprise Linux this is GNU compiler v8.3.1. Be advised to check out the newer compilers available as modules.

Since Fortran (and very old C++) requires compiling and linking libraries with the very same compiler, many libraries, first-and-foremost the MPI libraries need to be provided for specific versions of a compiler. On BwUniCluster_2.0, these provided libraries will only be visible to module avail, once a compiler is loaded. Hence, check out loading

to see the available MPI modules.

All Intel, GCC and PGI have compilers for different programming languages which will be available after the module is loaded.

The default Compiler installed on all compute nodes is the GNU Compiler Collection (GCC) or in short GNU compiler.

MPI implementations such as MPIch, Intel-MPI (derived from MPIch) or Open MPI provide compiler wrappers, easing the usage of MPI by providing the Include-Directory -I and required libraries as well as the MPI implementations library directorie -L for linking. The following table lists available MPI compiler commands and the underlying compilers, compiler families, languages, and application binary interfaces (ABIs) that they support.

The following compiler commands work for all the compilers in the list above even though the examples will be for icc only.

It may be compiled and linked with the single command

to produce an executable named hello.

This process can be divided into two steps:

When using libraries you must sometimes specify where the

In addition you have to tell the compiler which

When the program crashes or doesn't produce the expected output the compiler can help you by printing all warning messages -Wall and adding flags for debugging -g:

If the problem can't be solved this way you can inspect what exactly your program does using a debugger, e.g. GDB.

To use the debugger properly with your program you have to compile it with debug information (option -g):

Although the compiler option -Wall (and possibly others) should always be set, the -g option should only be passed for debugging purposes to find bugs. It may slow down execution and enlarges the binary due to debugging symbols.

The usual and common way to compile your source is to apply compiler optimization.

Beware: The optimization-flag used is a capital-O (like Otto) and not a 0 (Zero)!

All compilers offer a multitude of optimization options, one may check the complete list of options with short explanation on GCC, LLVM and Intel Suite using option -v --help:

Please note, that the optimization level -O2 produces code for a general instruction set. If you want to set the instruction set available, and take advantage of AVX2 or AVX512f, you have to either add the machine-dependent -mavx512f or set the specific architecture of your target processor. For BwUniCluster_2.0 this depends on whether you run your application on any node, then you would select the older Broadwell CPU, or whether You target the newer HPC nodes (which feature Xeon Gold 6230, aka "Cascade Lake" architecture).

While adding -march=broadwell adds the compiler options such as -mavx -mavx2 -msse3 -msse4 -msse4.1 -msse4.2 -mssse3, adding -march=cascadelake will further this by -mavx512bw -mavx512cd -mavx512dq -mavx512f -mavx512vl -mavx512vnni -mfma, where -mfma is the setting for allowing fused-multiply-add. These options may provide considerable speed-up to your code as is. Please note however, that Cascade Lake may throttle the processor's clock speed, when executing AVX-512 instructions, possibly running slower than (older) AVX2 code paths would have.

You should then pay attention to vectorization attained by the compiler -- and concentrate on the time-consuming loops, where the compiler was not able to vectorize. Further vectorization as described in the Best Practice Guides may help. This information is available with the Intel compiler using -qopt-report=5 producing a lot of output in hello.optrpt, while GCC offers this information using -fopt-info-all

All compilers have improved tremendously with regards to analyzing and detecting suspicious code: do make use of such warnings and hints. The amount of false positives has reduced and it will make your code more accessible, less error-prone and more portable.

The typical warning flags are -Wall to turn on all warnings. However, there's multiple other worthwhile warnings, which are not covered (since they might increase false positives, or since they are not yet considered so prominent). E.g. -Wextra turns on several other warnings, which will in the above example show that neither argc nor argv have been used inside of main.

For LLVM's clang the flag -Weverything turns on all available warnings, albeit leading to many warnings on larger projects. However, the fix-it hints are very helpful as well.

All the compilers offer the flag -Werror which turns any warning (allowing completion of compilation) into hard errors. 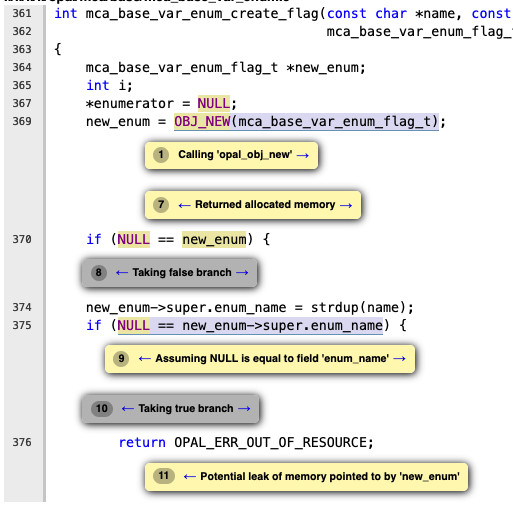 Another powerful feature available in GNU- and LLVM-compilers is static code analysis', otherwise only available in Commercial tools, like Coverity. Static code analysis evaluates each and every code path, making assumptions on input values and branches taken, detecting corner cases which might lead to real errors -- without having to actually execute this code path.

For GCC this is turned on using -fanalyzer which will detect e.g. cases of memory usage after a free() of said memory and many others. GCC's documentation on Static Analysis provides further details.